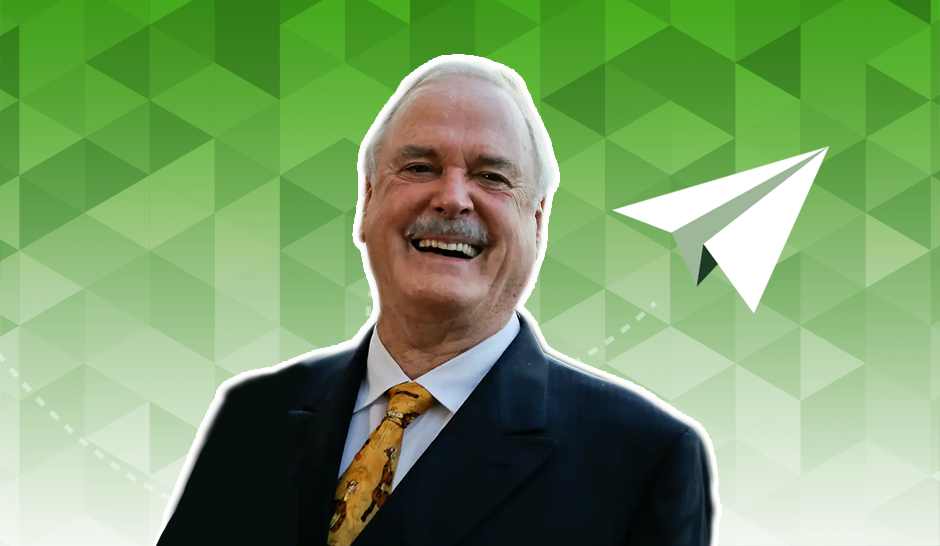 From co-founding the legendary comedy troupe Monty Python to running Fawlty Towers to writing and starring in films such as A Fish Called Wanda (1988) and Fierce Creatures (1997), John Cleese has enjoyed a near-peerless career for a half century now.

Many of the lessons the actor/comedian has learned along the way about effectively tapping one’s imagination and actualizing the best parts of what comes out of it were collected by Cleese in a funny, enlightening little book back in 2020 entitled, Creativity: A Short and Cheerful Guide.

The usefulness of the volume, however, extends beyond those looking to run off and join a flying circus—as Cleese himself notes in the introduction:

“By creativity, I simply mean new ways of thinking about things,” Cleese writes. “Most people think of creativity as being entirely about the arts­—music, painting, theatre, movies, dancing, sculpture, etc., etc. But this simply isn’t so. Creativity can be seen in every area of life—in science, or in business, or in sport. Wherever you can find a way of doing things that is better than what has been done before, you are being creative.”

So, with this in mind, Idea Financial thought we’d tease out three powerful takeaways from Creativity for small business owners.

“My experience is that whenever I’m faced with a difficult problem, I sense a pang of fear,” Cleese writes. “It’s straightforward terror that I may not be able to solve whatever it is that I’m wrestling with.”

At this point you have two choices: Attempt to fight off that fear—or embrace it.

“The good thing about panic is that it gives you energy,” he writes. “You never think, ‘I’m panicking, so I’ll have a nice snooze.’ Instead, the panic will help you get down to the job.”

2. Consistency is a Better Strategy than Waiting for Bolts of Epiphany

In Creativity, Cleese recalls how he and fellow Monty Python writer Graham Chapman would “get terribly frustrated and despairing when we hit a fallow period.”

And yet, despite the frustration, when the pair put in the time, there was always enough material at the end of the week.

“We came to understand that blockages weren’t an interruption in the process, they were part of it,” Cleese writes. “For example, when you eat, the bit where the fork returns empty to your plate isn’t a failure. It’s just part of the eating process.”

There’s a motivational saying that’s all the rage right now: Your comfort zone will kill you.

Cleese doesn’t go quite that far, but he does believe overconfidence can stop a growth mindset in its tracks.

“As a general rule, when people become absolutely certain that they know what they’re doing, their creativity plummets,” Cleese argues. “This is because they think they have nothing left to learn. Once they believe this, they naturally stop learning and fall back on established patterns. And that means they don’t grow.”

When you’re ready to transform your next business idea into a reality, Idea Financial provides business loans and lines of credit up to $250k with same-day approval and 36-month repayment terms. To fill out our simple, hassle-free application visit our website today.

Tap into your available funds and fund your next project. Continue business growth by logging in here.

Start your application for up to $250,000! Once completed you will receive a response in just hours!