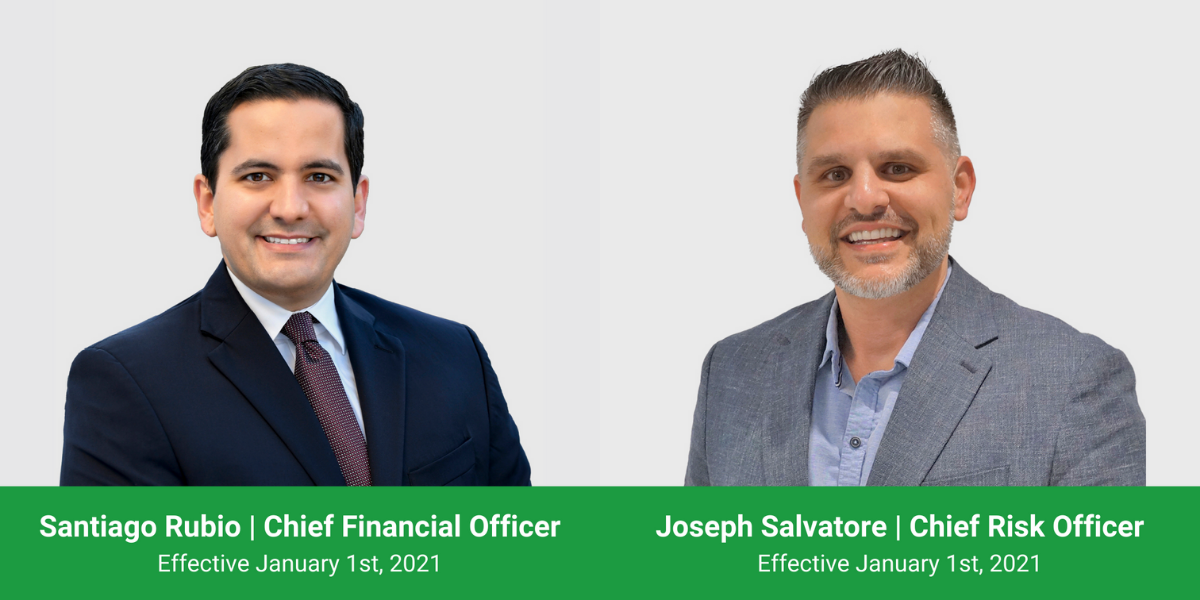 From the desk of the CEO
Tags:
Alternative Content

Idea Financial promotes from within as business expands

Idea Financial is thrilled to announce that it has decided to expand its C-suite by promoting Santiago Rubio and Joseph Salvatore to CFO and CRO, respectively. The change was effective as of January 1, 2021.

Joe and Santiago have helped build the company from the ground up and have been integral in helping this small business lender go from a concept to a prominent player in the alternative lending space.

Throughout the Covid-19 crisis, Santiago and Joe have solidified themselves as true leaders and have earned the respect and admiration of the company's employees, Board of Directors, and shareholders.

Santiago Rubio joined Idea Financial as its very first full-time finance hire, tasked with spearheading the Finance and Accounting departments from its pre-revenue beginnings, managing its growth to scale, and helping the company establish itself as a leader in the small business lending space. As he takes on his new role as Chief Financial Officer, he will now be leading the sales and operations departments as well as his finance department.

Prior to joining Idea Financial, Santiago began his career in the auto lending industry, working at GM Financial, where he held various roles within the auto finance captive's operations. After several years of gaining experience and familiarizing himself with large company operations, he was inspired by the opportunity to build a department from scratch and become a part of a true financial start-up in his very hometown of Miami, FL. Santiago is a CFA charter holder and holds a Juris Doctor from the University of Michigan Law School, a B.B.A in Finance and a B.A. in Economics from the University of Notre Dame.

"When we founded Idea Financial, we needed to find smart people willing to take a career risk on a start-up. Santiago could not have fit the bill more. He has treated this company like his own and has been influential in every major decision we have made. We are extremely proud to have Santiago in this critical role, especially as we work more closely with the capital markets," states Larry Bassuk, Founder and President of Idea Financial.

A few words from Santiago:

"It is an exciting time to be at Idea Financial where we have held an exceptional track record of operational excellence and innovation within a competitive space that still has abundant opportunities. I look forward to take on increased responsibilities, and I am thrilled to continue working with the amazing team at Idea Financial that thrives in advancing our mission of helping small businesses charge forward."

"Uncertain where to find a capable data scientist, I turned to LinkedIn and sent an unsolicited in-mail to Joe Salvatore," explained CEO and Founder,, Justin Leto. "After a few calls and meetings, it was obvious to me that Idea needed Joe. Thankfully, he took a great leap of faith and joined us. We have accomplished so much at Idea and Joe has been a pioneer; creating our automated underwriting system, forecasting risk, and guiding us through continued lending during Covid. More than anything, Joe is an advisor and his care for the company and its people is incomparable." Joe manages a team of data science engineers and has now taken the underwriting and marketing teams under his management.

Joe joined Idea Financial with a proven track record in data science, holding a PhD in behavioral science and master's degrees in both social psychology and statistics. When he is not supporting his Idea Financial family, he is a member of the faculties of University of Miami and Florida International University, as a professor of statistics.

A few words from Joe:

"It was serendipitous for Justin and I to cross paths back in 2017... I wasn't necessarily even aware I was interested in a new opportunity, but after a few meetings with the executive team, it was clear Idea Financial, pre-revenue no less, was the place I would call home," explained Joseph Salvatore. "I knew this was the place I could grow professionally alongside encouraging and capable folks, while simultaneously making an impact using data science to help accelerate our business growth both quickly and safely. It's clear to me today, in looking back at that final interview with the Idea Financial team, that was the last interview I will have ever had."

Idea Financial is a provider of small business solutions, providing a unique line of credit as well as term loans to small businesses. IDF provides up to $250K in funds with same day approval and funding. In addition, IDF is expanding its product line to include case expense loans exclusive for attorneys as well as small business insurance products. Idea Financial was founded by Larry Bassuk and Justin Leto out of their law firm conference room in early 2017. Today, IDF has funded thousands of American small businesses and is proud to help businesses #ChargeForward.

Tap into your available funds and fund your next project. Continue business growth by logging in here.

Start your application for up to $250,000! Once completed you will receive a response in just hours!